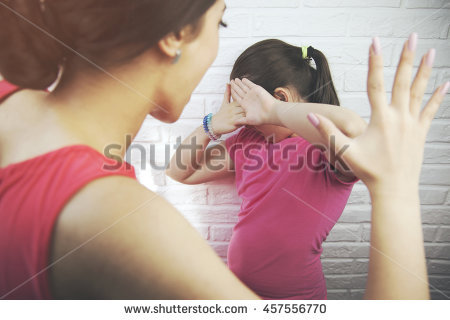 According to the bible we should not ONLY BEAT OUR CHILDREN; WE SHOULD ALSO KILL THEM FOR DISOBEDIENCE. Would you have your kid stoned to death?

24 He that spareth his rod hateth his son: but he that loveth him chasteneth him betimes (my translation for those who do not understand old English, beat the shit out of the kid.)

19 Then shall his father and his mother lay hold on him, and bring him out unto the elders of his city, and unto the gate of his place;

20 And they shall say unto the elders of his city, This our son is stubborn and rebellious, he will not obey our voice; he is a glutton, and a drunkard.

21 And all the men of his city shall stone him with stones, that he die: so shalt thou put evil away from among you; and all Israel shall hear, and fear.

When my kid got very naughty, I figured I could smack her, I would not hit as hard as my mama did, I would be more kind, make it less painful ……….

So, I did it, with restraint, but still, I beat her little hands. I prefer to call it a slap on the wrist to ease the nightmare of that day. She was 2 years old and I have never forgotten the expression on her face. She was frightened to death or horrified if you like. ‘My mama, my protector has suddenly turned into a vicious enemy, how can she hurt me?’ On top of that, I felt every little smack, as if it was me that was being smacked. But! It had to be done, right. The guilt that haunted me all night long, the shitty sleepless night second guessing myself chose to differ.

I asked myself “How could my parents have beaten me so much? Did they not have any sympathy? Did I not have that same face? Did they not love me as much as I love my child? How did they sleep at night?” The questions were endless, the answer simple.

The bible says do it, their parents beat them and everybody else beat their kids. Needless to say that was ages ago in Kenya where beating children could have been called adult sport…. at least in those days. You could hear parents bragging about beating their children as if it was an achievement of great magnitude. Yet, it was wrong. Am I angry with my parents? The answer is a clear no. My parents worked with the tools they had in those days. No one told them it was wrong, in fact, it was expected.

So how was I to discipline my kid without the benefit of violence? I turned to my sister for help. She said watch Supernanny on YouTube and take it from there.

2 thoughts on “SHOULD WE BEAT OUR CHILDREN?”